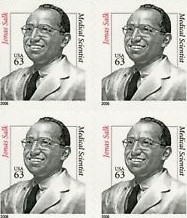 Ever wonder how many years, or centuries, parents bearing medicine have been saying, “Here, take this, it’s good for you,” to kids? I don’t know the answer, but I bet my mother told me that a million times, or so it seemed. I never believed it except when I was feeling really, really bad. Still, my wife and I said it to our three children plenty of times too. And of course, it didn’t work any better with them.

I got to thinking about this because of the pandemic we’re currently in, and how it’s made me remember the way during my youth we feared the scourge of polio—that is until 1953 when the work of Jonas Salk gave us a vaccine for it. I remember the relief my brother and I felt when trooping to the high school gym several times and standing in line with our parents to receive the doses required to achieve immunity.

Recalling all this made me remember a whole range of illnesses and remedies from my childhood. And fortunately most of what comes to mind now brings a smile rather than a frown. When I was a kid most of what we worried about with respect to our health was needles being rammed into our skinny arms and rear ends, how horrible all those stinky brown or red patent medicines tasted, getting a horse-pill-size tablet stuck in our little craws, and whether we were sick enough to get out of school. Sometimes the prospect of missing tests and homework almost made some of the other things worthwhile. And cherry-flavored Smith Brothers and Luden cough drops could be a pretty good fall back when sick-bed whining didn’t convince Mother or Daddy that what we really needed in order to feel better were a couple of Hershey bars.

A few of the remedies my mother put us through actually weren’t too unpleasant. That woman loved Vicks Vapor Rub, “Vicks salve” to her. At the first sign of sniffles or a cough, she’d trot out an old rag half-a-foot-or-so square, rub Vicks into it, warm it in front of one of our gas heaters, and pin it to our pajama tops. That warmth against our bodies felt comforting and helped us sleep, that is until it cooled off and stuck to our skin. A side hazard was going to school smelling like Vicks, but plenty of other kids smelled that way too.

Mother also liked to put a dab of the stuff in a spoon, melt it in front of a heater, and have us inhale the fumes to fight stuffy noses and sore throats. I think the psychological effect of her holding that spoon in one hand and rubbing our backs with the other was as healing as the gunk itself. Another of her other favorite remedies was a salt-filled cloth bag warmed in a skillet and held to the side of our heads to relieve earaches. It worked, at least temporarily.

Less pleasant were doctors’ house calls. Yep, we really did have a doctor that made them. This seemed like a good way to keep measles, mumps, and chicken pox from spreading, though I managed to get all three when I was about seven. Our town’s one physician was—or so it seemed to me at the time—a large and imposing man, made more so by the way he strode right into folks’ front doors without knocking and straight through their houses, all of which he knew well, right into their sick rooms. Don’t get me wrong, we always welcomed the relief we knew he’d bring, but those cold stethoscopes and imposing syringes were things of dread. And so were prescriptions for capsules. I couldn’t master swallowing them, so he told my mother to crack them open and dissolve the contents in a tablespoon of water. Yeah, right. That worked perfectly—for him. Just about ruined my taste buds.

There was one consolation about old Doc and needles. He was much handier with them than my father. One time when I was about 12, I contracted pneumonia or something and had to get a round of 13 penicillin shots over a couple days’ time. Doc Muse was too busy to give them all, so he said he could give Daddy a crash course on how to do it. Daddy said he knew how to give shots to horses and cows, so he could handle this just fine. From my perspective that was strictly a matter of opinion. Sometimes I begged so long not to get stuck that after the deed was done, it was almost time for the next one.

Not quite as bad, but nearly so, were all the patent medicines my parents administered. I don’t even remember what all of them were supposed to do, but I surely do remember how awful they tasted. Fletcher’s Castoria was the worst, but Hadacol was a close second. 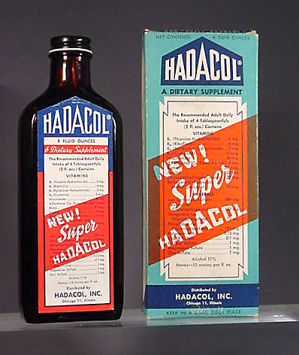 Hadacol was supposedly a vitamin, but in reality it was a Wild West show type of “tonic” invented by a colorful Louisiana politician turned successful huckster. With national TV advertising and paid endorsements from a number of entertainment and sports celebrities, the heavily alcohol-laced concoction swept through the mostly dry South like a tornado and did almost that level of damage to people’s innards before we all caught on.

Castoria was also one of the most widely hyped patent medicines of the time and had a much longer history. In fact, some version or other of it is still around. During my childhood it was marketed chiefly as a laxative for kids, but my mother seemed to think it was a cure for most anything that ailed us. Fortunately, with one exception, what I remember most about it was its bitterness.

The exception became a matter of family legend. Once when I was a teenager, I reached into the cabinet while on a mission to fill my sweet tooth and thought I was taking down a bottle of vanilla extract, which came in a similar-looking bottle. What I unknowingly grabbed, though, was Castoria, and I learned too late that it wasn’t a good ingredient for chocolate fudge. Unfortunately, my learning did not occur until after I poured, cooled, sliced, and began eating my supposed treat. Man, it hurt to put a whole pan of fudge in the trash. Of course, consuming it would have been worse.

The flip side of that catastrophe is that ever since then I haven’t been able to get my fill of fudge. Don’t laugh. My wife does enough of that. But I think my teen experience is as good an excuse as any for always craving fudge. Don’t you?

Vicks, Hadacol, and Castoria images are from Smithsonian Open Access.