This trio came to mind after a bunch of recent Facebook posts referenced several former classmates and students who excelled at music. You probably think you know where I’m headed here, and you could be right, but hang on a minute.

Elvis Presley, I loved. Johnny Cash, not so much. At least not when he was alive. These days, however, I find myself listening more to him than to Elvis. Earlier, I didn’t care for Johnny’s raspy voice, or the way he sometimes seemed to be talking his way through a song rather than singing it. If you’re a Johnny Cash fan and are starting to get upset with me, let me explain. You see, I’m uniquely qualified to make these kinds of assessments. In fact, my credentials for it are impeccable. I think you’ll agree when you see them. 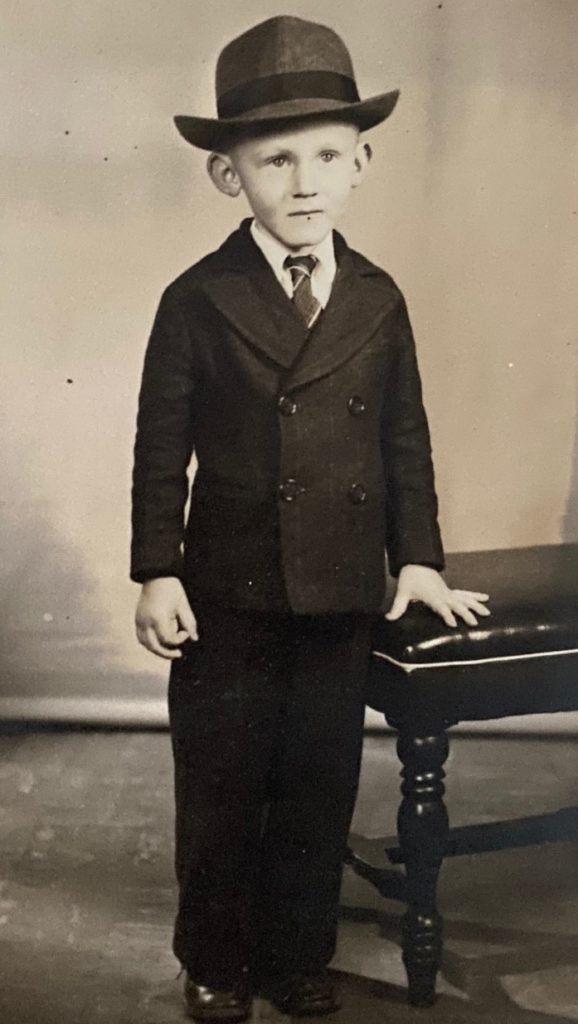 When I was in about the fourth grade, my mother, who sometimes played piano for church and whose father had taught dozens of country singing schools back during the Great Depression years, insisted that I take piano lessons. You can see the family lineage she imagined taking shape: three generations of musical excellence. It’s reflected in the photo where my parents posed me with a piano bench years before the lessons began. I was all ears.

So, I took the lessons—for four long years. The part I liked most about them was getting out of regular elementary school class to walk across our small campus to the music room for thirty minutes or so with the piano teacher. She was a lovely lady who did the bulk of piano playing at our church and who could jazz up hymns in genuine foot-stomping fashion. I don’t know where she got all the extra notes she put in, but she always had a ton of them. It was my favorite part of church.

For some reason or other, however, I never learned any of that from her. All she ever seemed to want me to do was play dadgum scales. They had zero melody, and when I was supposed to be practicing them at home, all I could think of was that I’d rather be outside playing baseball, which was my daddy’s contribution to my musical training. I had a lot of music books with scales in them, though. Looking back on them now, I feel like that fact alone ought to count as at least some kind of credential.

Another one of my bona fides is that I performed in piano recitals. I even have a photograph to prove it. When you look at it, just pretend you can’t tell that I was scared blank-less (you can fill in the omitted word). There were even printed programs for these events and everything. The order of performance went from beginning students to advanced ones, almost all of whom were girls. And once a beginner was done playing, if he wasn’t already messed up in his head because of all the notes he missed, he had to sit around and listen to the advanced students prove how bad he really was.

My lesson-taking came to a halt in the eighth-grade, after a kid a year younger than I lapped my skill set by a factor of something like ten in less than two years. It was downright humiliating, and I never really recovered from it. Never mind that the kid went on to teach music at a university.

My third bona fide, I earned in high school. We didn’t have a school band until I was in the eleventh grade, and boy were we all excited to try out for it. I loved the sound of saxophones, and lo and behold the band director said he thought the alto sax would be a great instrument for me. That could have been because my parents could afford to buy one for me, but I didn’t think about that at the time.

The saxophone experience turned out a little better than the piano. I think that’s because I wasn’t in it alone. You might even say I excelled, relatively speaking. Our second year we got uniforms and everything, and although I still can’t understand why, I was elected band captain and made “right guide” for our marching performances. That was a huge responsibility. The way I marched onto the football field from the endzone dictated how everyone else did too. I was the formation leader. They had to follow me. I’ll never forget what the director told me after our first performance. “Rollie,” he said, “I don’t know how you managed it, but that was the most complex zigzag entrance I’ve ever seen a band make, and I don’t want ever to see it again.” I said, “Thank you. I heard the crowd applauding.” He said, “Did you also hear them laughing?” 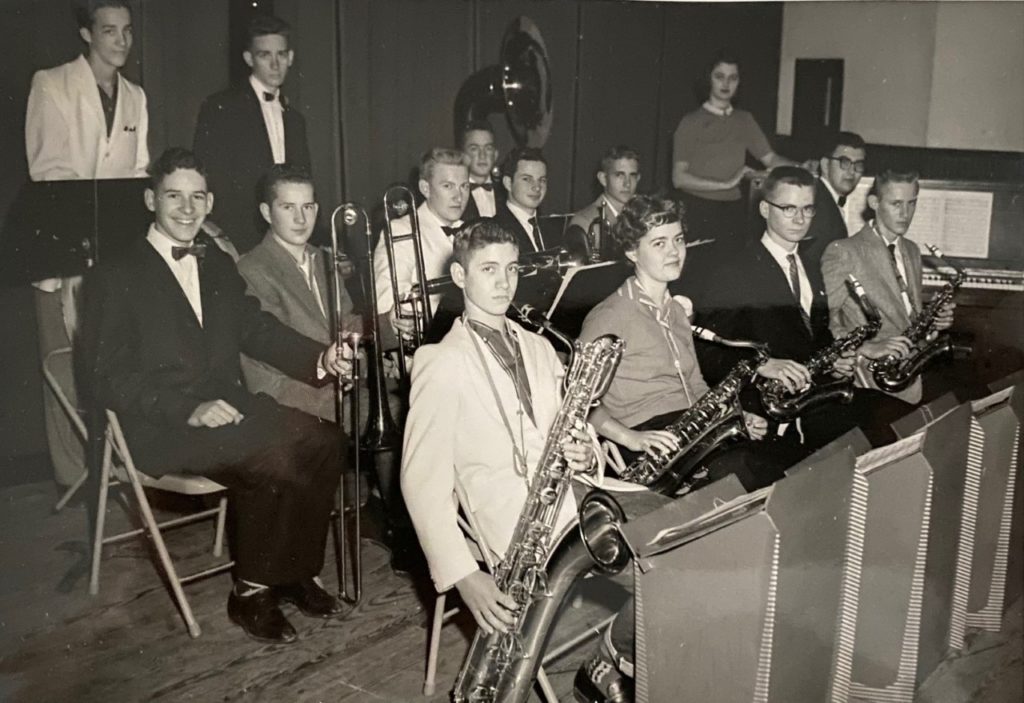 I’ve often considered that performance one of my proudest musical moments. Even more memorable than the second-place medals that I and three other students won for a saxophone ensemble at the state band festival later that year. More even than the dance band we put together that same year. By the way, that’s the future university music professor at the keyboard in the photograph.

Unfortunately, I remember just as well what one of my friends said to me when as first chair for saxophones I was struggling with a particular passage in a tune we were practicing for the spring concert. It had something to do with being tone deaf. I thought at the time he was teasing, but sadly, he may have been right.

A few days ago, a writer friend of mine was standing at a library podium waiting for the “go” signal to start a Zoom event, and he was joking with the computer technician. The tech must have said something to the effect of, “Sing a little song for everyone while I fix this glitch.” My friend replied that he couldn’t carry a tune in a lard bucket.

I could see on my screen that he didn’t have one. It was plain as day. However, his comment made me realize why so many people have stared at me over the years when I was attempting to sing in public. I’ve never had a lard bucket to use on any of those occasions. So now I’m on high alert searching for one. Does anyone have a Mrs. Tucker’s bucket? If you’re not acquainted with Mrs. Tucker, ask Siri or Alexa if one of them knows her. More than a few pigs have made their acquaintance with Mrs. Tucker, but of course, you can’t ask them. Meanwhile, excuse me while I put on Johnny’s “One Piece at a Time.” I can sing along with that pretty well.