A while back in a blog post about eating squirrels when growing up in southern Arkansas, I mentioned the single time my daddy took me hunting for raccoons, or “coons” as everyone called them. We never talked much about the near-tragic end of that evening, but over the years nearly everyone on the hunt talked about another part of it. In the retelling here, names are changed to protect the innocent and keep me out of trouble. 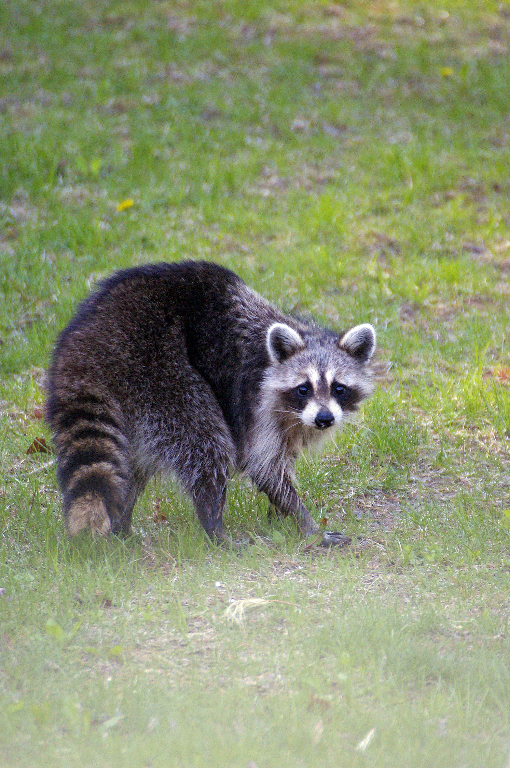 Daddy didn’t hunt often because, although he enjoyed it, he wasn’t truly passionate about it and more importantly, he didn’t have a lot of spare time for it. One of his best friends was passionate about it, however, and he hunted all sorts of critters—for food, for sport, and to help friends protect their corn, bean, and other crops from animals looking for easy meals.

Smitty kept a large pack of hounds, big ones with lots of energy and huge voices. When they got the scent of their prey, you could hear them for what seemed like miles. Farmers sought out Smitty and his dogs often. Mostly they only frightened the critters away, but more than a few made it to Smitty’s dinner table, and not as guests.

On this particular night, Smitty loaded several of his dogs into his black Ford panel truck, from which he had removed all but the front seats, and then picked up Daddy and me and another fellow in town and headed out to Mr. Ed Gordon’s place. As Smitty drove, the rest of us sat on slender wooden folding chairs in the back with the dogs.

A little beyond the town limits we picked up Mr. Bob Pine who had been after Smitty for a long while to take him on a hunt. Even though Mr. Pine wanted to go, he was in no way a dog person, and he didn’t like sitting back there with all the dogs rummaging around sniffing, panting, passing gas, and trying to lick his face. As we rode along, he kept saying to the biggest and friendliest one, “Get away, Jolly. Get away, Jolly! Get the hell away from me!” If he said it once, he said it a hundred times. Or, at least so it seemed. “Get away from me, Jolly!”

Except for being brown, Jolly didn’t look anything like Katy, one of our current family dogs pictured here. She’s a Texas rescue animal  we believe is half Mountain Feist, a breed known for their squirrel-hunting acumen. But Jolly was just as confident about what he regarded as his rightful place among humans.

Finally, Smitty said, “Pine, if one of them big old coons falls out of a tree tonight and lands on you, you’re gon’ change your tune. One near about tore old Bill Watson to pieces last week. He’s still laid up.”

When we got to Mr. Gordon’s farm, we all piled out, and he led the way to one of his back fields where coons had been laying his corn to waste. Smitty turned the dogs loose and off they went in the dark, leading us through the field, across a fence, and into the woods. We stumbled along in the general direction they took with only our carbide lamps to guide us until eventually we heard the dogs raising a ruckus way up ahead. “They’ve got one up a tree,” Smitty said, and we hurried toward the barking.

Our rushing got us tangled up in a blackberry thicket, and when we finally reached the dogs and shined our lights into the giant oak tree they were pawing, we saw not one but two pair of coon eyes peering through the darkness. Mr. Gordon and Smitty each got off a shot, and something heavy came crashing through the branches, glanced off Mr. Pine’s shoulder, landed at his feet with a thud, and started thrashing against his boots.

The only sound any of us remembered hearing after that was Mr. Pine shouting, “Come here, Jolly! Come here, boy! Get him, Jolly! Get him, boy! Jolly, where the hell are you?”

I don’t remember whether the coon got away or exactly what Jolly did, other than ignore Mr. Pine’s pleas. I do remember, however, that Mr. Pine did a lot of cussing and the rest of us were practically rolling on the ground laughing.

That wasn’t the end of it, though. On a later hunting trip that I only learned about after the fact—this time for squirrels—Smitty, Mr. Pine, and another fellow got separated from the dogs and lost in a river bottom. The men split up with the understanding that the first one who found Smitty’s truck, which he’d left unlocked, would sound the horn to guide the others in. Mr. Pine found it before the others and with it Jolly, who was sitting next to the front bumper. When Mr. Pine tried to get in the vehicle, Jolly bared his teeth and growled, and Mr. Pine froze. Smitty and the other fellow found man and dog some two hours later sitting beside the truck staring at each other, one of them afraid to move and the other ready to pounce.

“Looks pretty smart to me,” Smitty said, “protecting my truck that way. And you have to admit, he’s got a darn good memory.”

Copyrighted raccoon photo courtesy of John Adamski. To be notified of new posts, please email me.