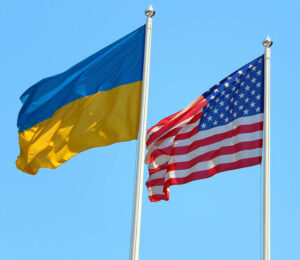 This past week, as I tried to carve out time to work on my next novel while also following the crisis in Ukraine and the Senate hearings on the new Supreme Court nominee, I was reminded of a brief conversation I had with a businessman on a plane many years ago. Keep reading. It’s relevant, I promise.

The conversation happened on a small passenger plane somewhere over the Midwest. We had just taken off from Kansas City. At least I think that’s where it was, though it might have been Omaha. We were heading to some place on the upper Great Plains. Sioux Falls I believe it was. While I don’t remember those details—I made several trips to the region over time—I recall the man’s appearance and manner clearly. And what he said. Like it was yesterday.

After filling the plane, except for one seat, which happened to be on the aisle next to me, the airline held the flight for another ten or fifteen minutes, though it seemed longer at the time. Finally, a sizable fellow wearing a dark overcoat, navy suit, white shirt, and red tie and carrying a big leather briefcase came strolling down the aisle like he had all day.

He shucked his coat and waved to an attendant to take it for him, which she did. Then he stowed his briefcase, struggled into his seat, fastened his seatbelt, and leaned into the aisle and waved at the attendant again. She came back, and he asked for drink. When she told him he would have to wait until after takeoff, he sighed loudly and sat twiddling his thumbs until we were in the air. He never once looked around at me or anyone else.

Meanwhile, as soon as we were airborne, I retrieved some papers, photographs, and U.S. Geological Survey maps from my much smaller briefcase, lowered my tray table, and set to work. When the fellow’s drink—something or other with alcohol—came, he took a couple of long swigs, and sighed again. Bored, he glanced over to see what I was doing.

After a moment, he asked, without any preliminary greeting, “What line of work are you in?”

“I’m a historian,” I said. “I travel around for the National Park Service researching and reporting on historic sites that might qualify for National Historic Landmark designation.” I didn’t go on to explain that I was doing that under a NPS contract with my employer, the American Association for State and Local History.

I suppose I should have just kept my mouth shut after that, but I didn’t. “What line of work are you in?” I asked.

“I own a chain of convenience stores,” he said. “I’m going around to see how they’re doing. Making sure the annual reports I have on them are accurate. Seeing if I need to make any changes.”

“Oh,” I said, “You’re doing history work.” Not only did he not reply. He didn’t speak to me for the rest of the flight, which was fine with me.

The conversation came back to me a couple of days ago when I heard a U.S. Senator pontificating about Supreme Court reform during Ketanji Brown Jackson’s confirmation hearings. The Senator was clearly performing for the camera, trying to create sound bites for some future reelection campaign. As aggravating as that was (and always is, regardless of who’s doing it, though some are a hundred times more annoying than others), that didn’t concern me as much as seeing how uninformed he was about his subject. How he didn’t know recent history and hadn’t been keeping up with things going on around him that he should have known about.

He knew that President Biden had appointed a commission to study the court, and he said he was eager to see the commissioners’ “recommendations” for change when their report came out. He didn’t know that the commission had already submitted its report. Last December, as a matter of fact. Nearly four months ago. He also didn’t know that the commission—which was made up of thirty-four individuals, mostly law professors from center-left to center-right on the political spectrum—was not charged with making recommendations.

The commission was asked to analyze “the principal arguments in the contemporary public debate for and against Supreme Court reform.” And that’s what it did, in a 288-page document that discussed a variety of potential restructuring ideas. In case anyone wants to peruse it, you can read it here. The Senator obviously had not. And apparently, no member of his staff had prepared a brief on it for him. He was spouting off about an issue he hadn’t bothered to keep up with.

If the Senator had read the report, he would have known that the commission examined and reported on five aspects of the history and function of the court: reforms and reform debates; membership and size; term limits; role of the court in the constitutional system; and procedures and practices. Consistent with the commission’s charge, it made no recommendations.

Supreme Court reform has long been a political football, and the president appointed the commission and tasked it the way he did in part to avoid having to take a position on it and thus distract from other matters more immediate to his presidential agenda. I have no problem with that, as the effort was still worthwhile. It created a basis for continued, and better informed, debate on court reform in the future.

Better informed, that is, if policy makers read it. I find it highly disturbing that a member of the Senate Judiciary Committee had not taken time to keep up to date about something so critically important regarding the highest court in the land, especially while participating in confirmation hearings for a member of that court. I would be willing to bet money that he’s not alone in that among members of the committee and the Senate as a whole.

The current situation in Ukraine also shows the importance of knowing about the past and staying informed about its relationship to the present. 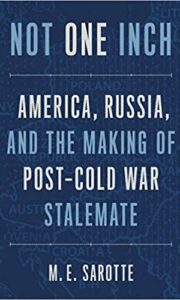 Before I get into that, let me note that I am aware that Abraham Lincoln and Barbara Tuchman, among others, warned about the potential for hindsight to distort our views of the past, especially in time of war. Nevertheless, in looking back, as Johns Hopkins University historian Mary Elise Sarotte did recently in her book, Not One Inch: America, Russia, and the Making of Post-Cold War Stalemate, it’s possible to see how a series of decisions made over time contributed to the brutal and immoral war that Vladimir Putin is waging against Ukraine today.

Apparently Putin’s pique is the diminished role of Russia in the world, which means his own standing is diminished (and I would argue that is the most nettlesome thing to him). He blames the United States and its allies for systematically co-opting, over several decades, the westernmost parts of the former so-called Russian Empire through, among other means, the gradual growth of NATO. Thus, leaving Russia boxed in by adversaries. And by democracies that pose a threat to his authoritarianism. 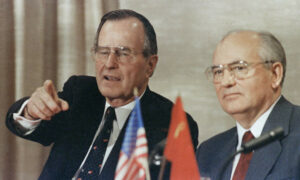 An early milestone along the way toward this occurred in 1990, when President George H. W. Bush’s secretary of state, James Baker, asked Mikhail Gorbachev if he would accept a unified Germany tied to NATO, provided NATO would not expand farther to the east. When Baker told Bush that he had asked Gorbachev that question, and that Gorbachev said he would accept a unified Germany under that condition, Bush reportedly replied, “To hell with that! We prevailed [in the Cold War] and they didn’t. We can’t let the Soviets clutch victory from the jaws of defeat.” Ultimately, Gorbachev agreed to the unification of Germany without conditions, apparently to secure various financial assistance for his tanking economy.

At that point in time, NATO had already expanded from its original twelve members to take in, between 1952 and 1982, Greece, Turkey, West Germany, and Spain. Later, during Bill Clinton’s presidency, various of his advisors, including two secretaries of state, Les Aspin and William Perry, expressed concern about pushing NATO too far east. Nevertheless in 1999, the Czech Republic, Poland, and Hungary, all of them small countries seeking security against the Kremlin, were admitted as members. French President Jacques Chirac warned then, “We have humiliated them too much…the situation in Russia is very dangerous,” and “One day there will be dangerous nationalist backlash.” 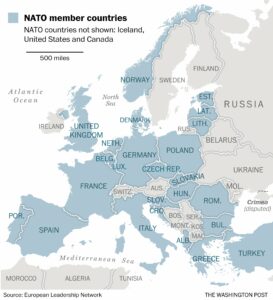 Then came President George W. Bush, who wanted to be known for advancing democracy around the world. At his urging, Lativa, Estonia, and Lithuania were brought in, as were Slovenia, Slovakia, Romania, and Bulgaria. Others—Albania, Croatia, Montenegro, and North Macedonia—joined later.

Fred Kaplan, former Moscow bureau chief for the Boston Globe, wrote in reviewing Professor Sarotte’s book for The New York Review of Books, that although it’s impossible to know the extent to which enlargement of NATO, coupled with its potential future enlargement, contributed to Putin’s mania, it clearly served as one pretext for his actions.

I have not read the many volumes written about what lay behind each of those expansions of NATO, so I don’t know the degree to which the decisions were right or wrong for the times in which they were made. Or how much the decision-makers’ knowledge and understanding of the past influenced them compared to their understanding of the then-prevailing circumstances. In any case, I am thankful that NATO is what it is, and that it is where it is, today.

I wrote the foregoing paragraphs before hearing President Biden’s March 26 speech in Warsaw, where, among other things, he stated that Putin cannot remain in power in Russia. A statement the White House later said did not mean that the U.S. was formally calling for regime change. That is desirable, however, and would be an ideal resolution of the current crisis. It’s not a realistic expectation in the short term, however.

So, I’m thankful, too, that apparently current policy makers are at least to some extent aware of the circumstances and collective impact of all those previous decisions about NATO. Perhaps in the coming days and weeks, understanding how they were made in the context of their times can help policy makers identify and pursue routes both to stop the invasion as quickly as possible and to ensure that Russia is contained in the future.

There are, of course, two other potential explanations for the cruel and inhumane behavior of the Hitler of our time. The first is that Putin is ignorant of history, as seen, for example, in his claim that Ukraine has never been an independent nation, as well as in his army’s dated military doctrine regarding the use of tanks and artillery without adequate accompaniment of infantry.

The second explanation is the one I like best at the moment. It is best summarized in a favorite expression of that eminent philosopher Barnard P. Fife, whom I often see opining on re-runs of the Andy Griffith Show: “He’s a nut!”