Looking back can be fraught with peril. Among other things, it can make you tell stuff you ought to leave lying where it is. A few weeks back, after a visit with relatives I hadn’t seen in a long while, and during which we got to sharing recollections and tall tales from our childhoods, I had the crazy idea to write a blog about typical but minor—at least I thought they were typical and minor—adolescent transgressions.

To this day, I’m not sure why I thought that was a good idea. And since I’m writing this, I guess I didn’t learn anything from it.

One of my daughters posts my blogs to my website whenever she can work it into her busy media marketing job schedule. She chose to post that one on a Monday morning—to get it “out of the way,” she said.

No sooner had the blog gone live than I received a phone call from the accomplice to one of the teenage shenanigans I had confessed to. I realized who was calling before I answered and figured he had read the piece. I wasn’t worried as I picked up the phone, though. In fact, I guessed he probably liked it. And he had. He said he and his wife had laughed their heads off about it.

However, right after that I received an email about it from the younger sister of one of my high school classmates. Her mom and dad had been close church friends of my parents, and my mother had been her third-grade teacher. “I didn’t think you ever did anything wrong,” she wrote. Opps! Major guilt trip, right then and there.

Close on the heels of that email came one from a cousin who is one year my senior. “I can’t believe you did that!” she wrote, or something to that effect. But then she confessed that she’d done it once herself—which she blamed on her boyfriend of the time. 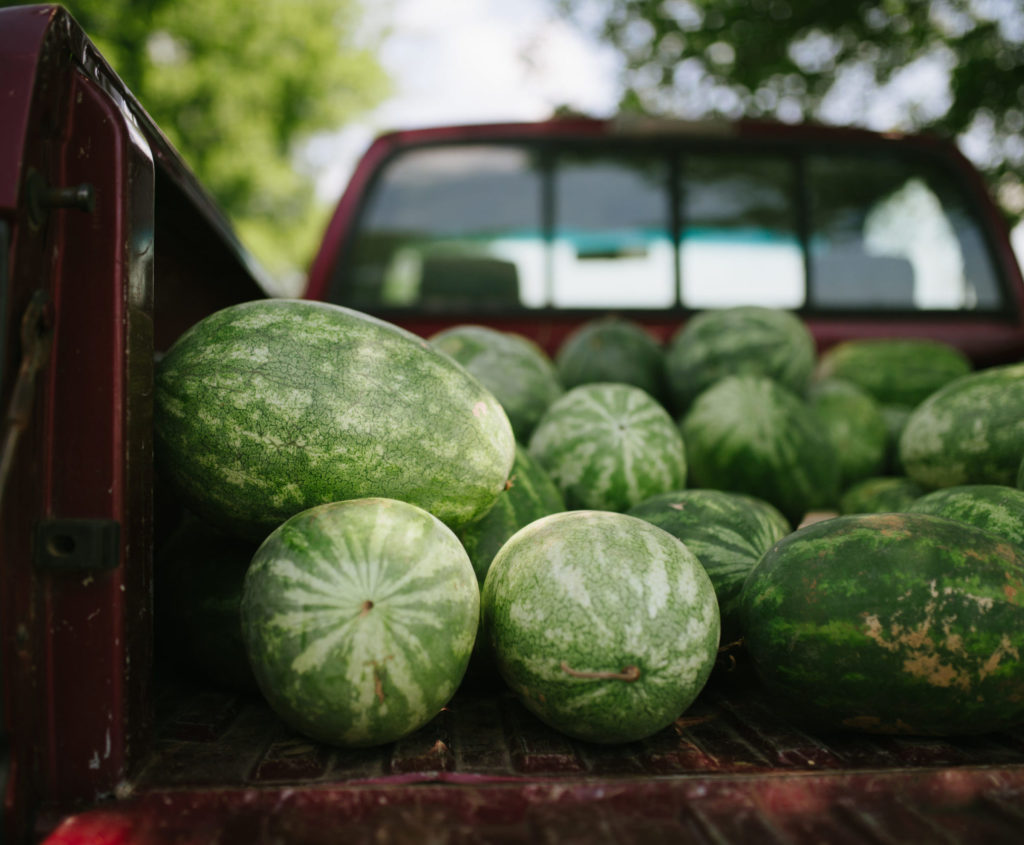 By the way, in case you didn’t see my previous blog, the “that” here is not what you might be thinking. I’m talking about kids “borrowing” watermelons. Okay, I mean “stealing” watermelons. I also mean one or two at a time, not by the truckload.

Where I grew up in the rural South in the 1950s, that was about the most trouble a kid could get into if he or she didn’t want to sneak some of Uncle What’s-His-Name’s illegal hootch—we lived in a dry township—and drink it out behind the barn. Or buy some cigars in the next town over, where the shopkeepers didn’t know your parents, and smoke them at the drive-in theater in the county seat, not with a date, of course. I’m guilty on the cigar-smoking score (Little Acts they were called; they came in a neat little tin box) as well as the watermelons, but not on the booze thing. I was too scared my daddy would tan my hide.

Come to think as I look back on it, I’m not sure why it never occurred to me that Daddy or my mother might smell the cigar smoke in the family car seats, because he didn’t smoke, at least not at that time, and she never did. If they did smell it, they never said anything, which would have been uncharacteristic. So, I guess I did a good job of airing out the seat covers when I aired out the car by using my lead foot on the way home. But that’s a story for another time, and I’m not going to get into it here.

I will say, though, that the only time I ever got caught doing something like that was when our preacher drove me to the county seat to pick up his relatively new Buick from the shop and let me drive it home while he drove his old Jeep. Boy, was I surprised when I decided to air out the Buick as I headed down a steep hill into a long stretch of straight bottomland highway and happened to glance over and see the preacher standing in the yard of a member of our congregation. Only thing he ever said about it was, “Run’s pretty good, doesn’t it?” Whew!

But I digress. So, trying to be clever in replying to my cousin, I said something about the watermelon event I had written about—okay, the cold case minor crime I’d confessed to—not being my only such bone-headed escapade, but I wasn’t going to tell about the other one. She begged and chided me about it, though, so I told her that if she promised never to leak it to St. Peter, I’d tell it to her.

That led to this little piece, which proves that I didn’t learn anything from posting the previous one. To try to put a better face on things, I like to think that the second episode shows that I’ve always welcomed a challenge.

It happened like this. We lived on the edge of a very small town. About two miles past the town limits, the father of another one of my classmates, a girl, had a huge garden and watermelon patch in a field just past his house. He also had a bunch of hound dogs and was said to have taken a shot or two at people trying to purloin his melons. So, you guessed it. I and about four or five friends (I either disremember who they were or refuse to give them away) had to see if we could “borrow” one.

We parked Daddy’s ’56 Ford four-door sedan across the road and down a little way from the patch and left the windows down because it was a hot summer night. There was no traffic on the narrow blacktop road, and stupidly, we made our way across it and into a big ditch, which was fortunately dry, and crawled under the wire fence and about fifty feet into the melon patch. Before we could even rise into a crouch, the man’s hounds started barking (sounded like they were right in our ears), the lights went on all over the house, and we could hear the dogs tearing through rows of corn between the watermelon patch and  the fellow’s back yard.

This time we hurdled the fence—probably would have set some sort of track record had our little venture been a sanctioned athletic event—and jumped the ditch. As I was racing around the back of the car to get to the driver’s seat, I saw two boys diving headfirst through the open windows on the passenger side. To heck with doors!

We peeled out, got back to town, and went home unscathed, unidentified, and without having gained any wisdom from what we did. All seemed well until at school the next day, one of the boys reported that he had lost a new shoe among the farmer’s plants and his mother was asking where it was. He had made some excuse that wasn’t holding up very well, and he was scared she would ground him, or worse, if he didn’t produce it. The rest of us didn’t care about his shoe for his foot’s sake or for the sake of his rear end either, but we were scared he’d spill the beans and we’d all be grounded, if not thrashed.

So, what to do? For a bunch of pea-brained adolescent boys, the answer was simple. Go back and look for the shoe. Maybe the farmer hadn’t found it. Maybe the dogs hadn’t either. We hadn’t got caught the last time, had we? And this time we’d be more careful. We would drive a mile or so past the farm, take a perpendicular road for a mile or so, hide the car (this time, we’d prey on a different boy’s parents for a vehicle), hike through the woods, and enter the melon patch at the farthest point from the house.

With this foolproof plan in hand, we set out that very night to retrieve the shoe. We drove, we parked, we hiked, we crawled, we heard the dogs bark, we saw the lights come on, and then we ran like hell. As bushes and low-hanging limbs make swishing noises on our clothes and limbs, we waited for the sound of shotgun blasts and the whiz of buckshots overhead. No gun was fired, though, no one was bitten, and no shoe was found, unless by the farmer. Best I recall, this was our last melon-borrowing outing.

As for other such idiotic teenage transgressions, I’m not ready to talk about those, at least not yet. I do want to say, however, that usually, adolescent boys grow out of such stupidity. With about three exceptions, I don’t recall exactly who all was in on this second dumb watermelon stunt, but I do recall who was in the group of boys who often messed around together. 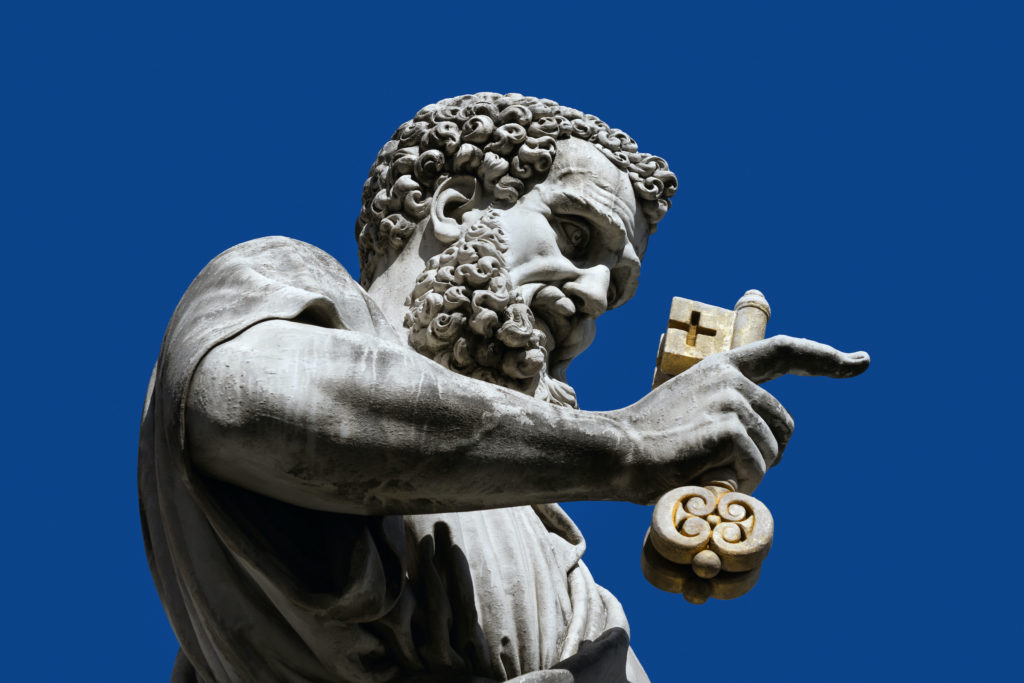 I’m not sure what that proves. Just thought I’d mention it. No, that’s not quite right. I mentioned it because I’m proud and thankful for having grown up with all the aforenoted and of what they ultimately became, proving along the way that teenage male stupidity isn’t necessarily incurable.

Anyway, like I asked my cousin, please don’t let any of this, except the previous paragraph, get back to St. Peter.