“Why,” you may wonder, “would anyone ask what a bicycle is?” Well, it’s because this morning for no special reason I got to thinking that a bicycle may not be all that it used to be. Meaning that depending upon how you look at it, a bicycle appears to be both less than and more than it was when I was a kid eons ago.

If you were fortunate enough to have a bicycle as a kid, I bet you remember it. And if you had more than one over time, I bet chances are good you have cherished memories about that first one. Not so with me.

I don’t remember exactly when I got my first bicycle, but I do recall that it was a plain, used, red-and-white, 24-inch model with training wheels, and it was too big for me. I think it was a Schwinn, but I’m not sure. My second, and the last, bicycle of my childhood I remember vividly, however. I got it for Christmas in 1949, and to borrow the way that adults have of speaking about their cars today, “It was loaded.” And I was fortunate to have it. 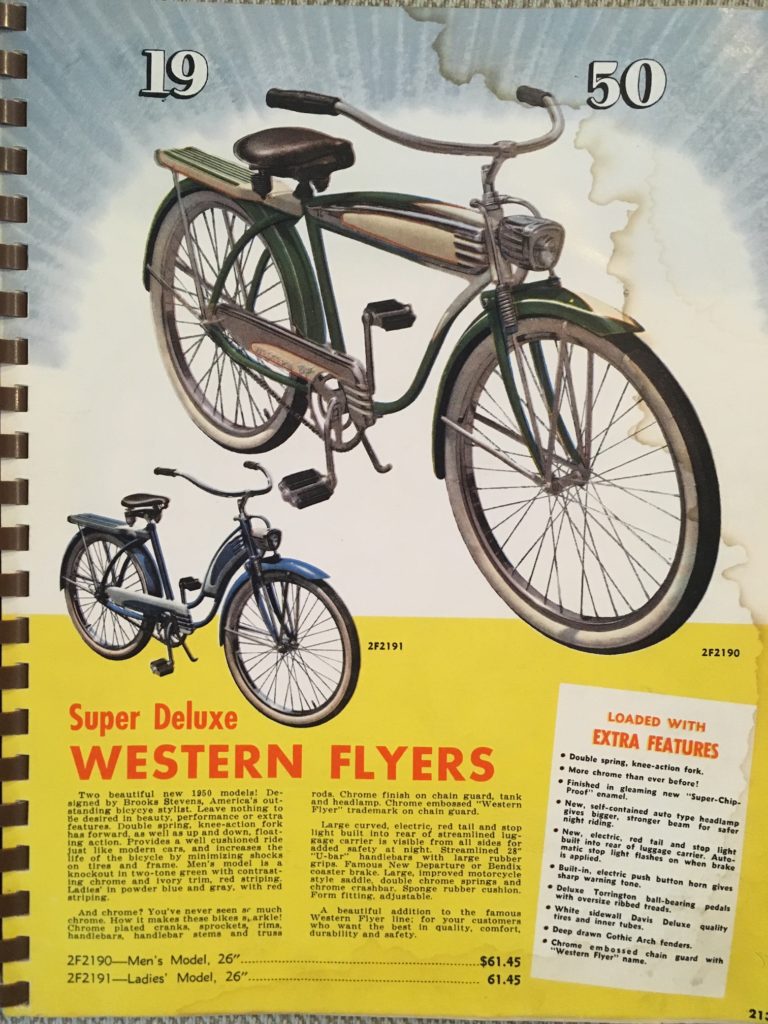 It was a green-and-white, 26-inch, 1950 “Super Deluxe” model Western Flyer—made for and distributed by the Western Auto Company—with white-wall tires, padded seat, a decorative tank between the seat and handlebars, an electric headlight and electric taillight, an electric horn, a double-spring knee-action fork to hold the front tire, a luggage rack, and lots of chrome. My parents would not have been able to afford it if Daddy had not owned a Western Auto store and could get it wholesale. Even then, I expect it was a stretch.

But that’s only the physical description. Depending upon my imagination on any particular day or at any particular time, that bicycle was also a horse, a motorcycle, a car, a truck, or a plane—even a tow truck using a rope to drag an apple crate passing for a broken-down car or to pull my little brother along on his smaller bike. The latter towing didn’t happen often because such efforts on my part usually caused a spat, and today, he’d tell you that it never happened at all.

My bike was also an excuse to use Daddy’s tools—so often that  eventually he gave me some of my own. I’ve always been more handy with words than wrenches, but I loved working on that bicycle, even when it didn’t need it. It had Bendix brakes that didn’t seem to require adjusting as often as New Departure brakes, which had a bunch of discs that required aligning, but I took them apart, cleaned them, and put them back together many times whether they needed it or not.

My bike was also freedom. Because we lived in a place—a small town—and at a time when, for various reasons, streets and neighborhoods felt safer than they do today, I was allowed to ride my bike just about anywhere anytime, except for the U.S. highway that carried big-rig trucks through town at speeds often well over the limit. 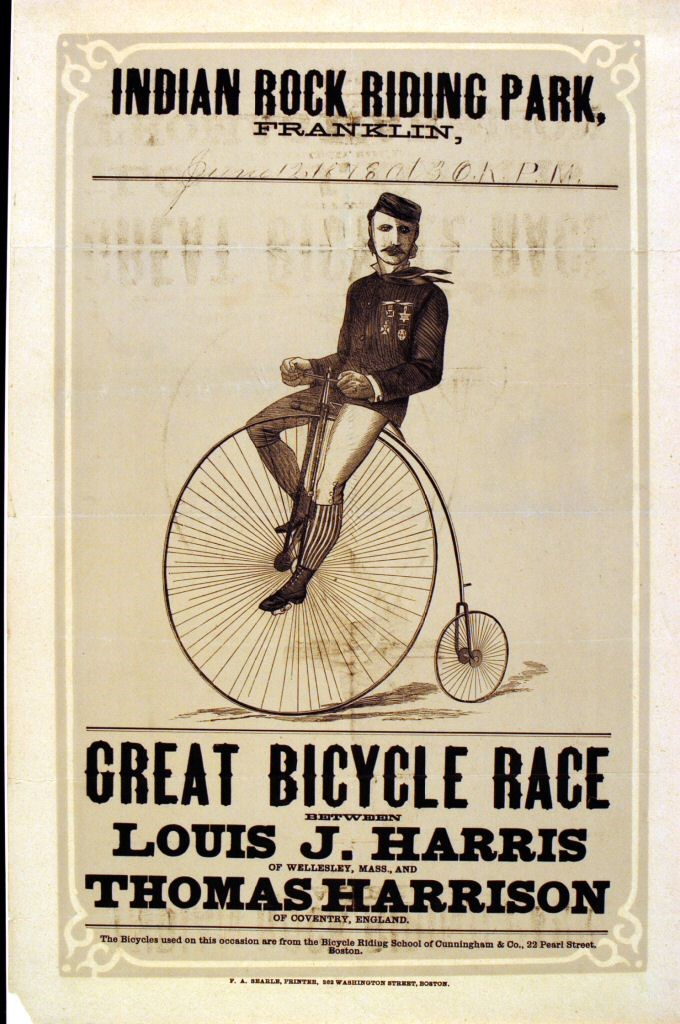 We raced our bicycles, too. It was a lot safer than late 19th-century “high wheel” bicycle racing and wouldn’t come close to the many types of bicycle racing today, but it was plenty exciting to us at the time.

I know that imagination and pretend play still figure in some of the ways kids use their bikes today, but I’ll wager that in this age of so many types of electronics-driven entertainment, the role of imagination and pretend is much diminished in bike riding. And I feel certain that the sort of freedom I enjoyed is also diminished. I’m guessing, though, that it’s not missed much because it’s hard to miss something you never had. Given all of that, seeing a family out riding together in the neighborhood or on a bike path somewhere always makes me smile, as in those instances open-ended fun is on obvious display.

One big similarity between back then and now remains, but present-day versions of it—here I’m thinking about purposeful risk-taking in play—seem way more outsized. We took all sorts of risks on our bicycles in those days and thought of ourselves as really cool daredevils for riding hands free. Or coasting downhill with one foot perched on the seat and the other stuck high in the air behind us, our hands barely touching the handlebars. Or turning the handlebars drastically while putting on the brakes so as to skid sideways and throw up a batch of pea gravel from freshly black-topped streets. Or sneaking off to some temporary highway department gravel dump to get a running start and see how many overlapping six-foot-high piles of gravel we could clear in a daring jump before crashing down while trying to avoid smashing our privates on the bicycle frame.

All that seemed pretty adventurous at the time, but I have to admit that it pales in comparison to all the X-Games sort of trick- and daredevil-riding that kids and a lot of adults do today in competitions and otherwise. 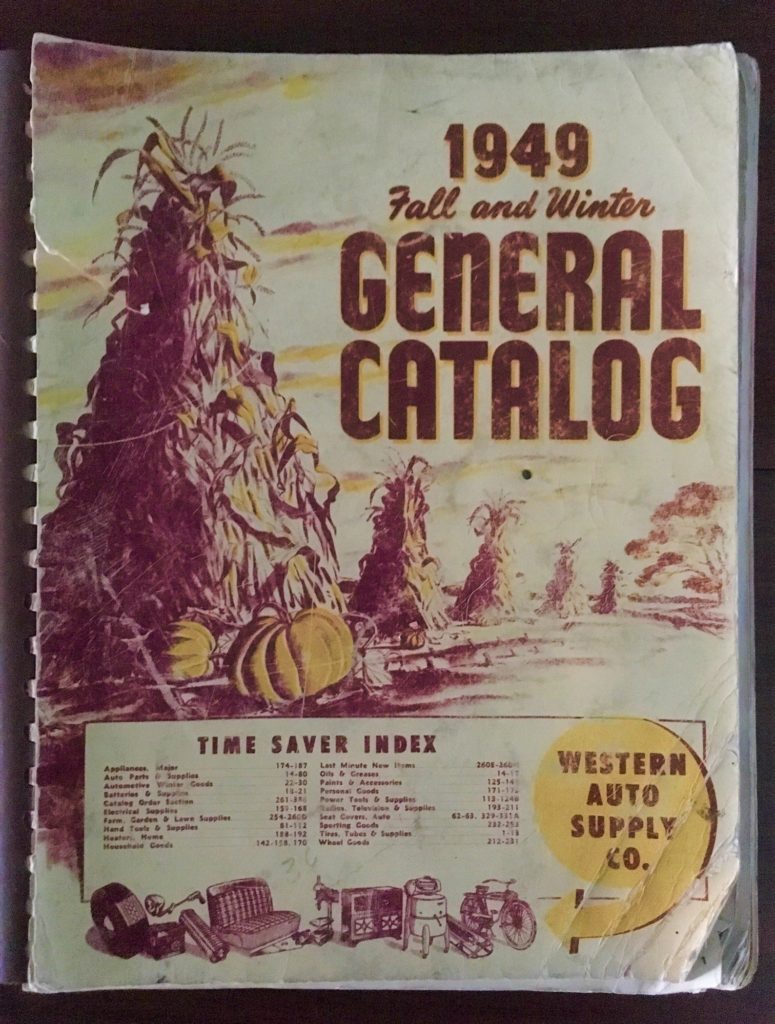 The bottom line for me after all this ruminating is that I wouldn’t trade my memories of that 1950 “Super Deluxe” Western Flyer for any other possible kind of bicycle recollection. I only wish I had saved the bicycle itself and that I had some actual photographs of it, but that’s another story. In the meantime, thankfully, I can enjoy going into the Western Auto catalog, finding the advertisement for my bike there, and seeing in my mind reel after reel of moving images of wonderful boyhood experiences. The 10-speed that most of the time hangs in my garage and the stationary bike I ride every day rain or shine don’t provide anything that begins to compare.

What are your favorite childhood bicycle memories?